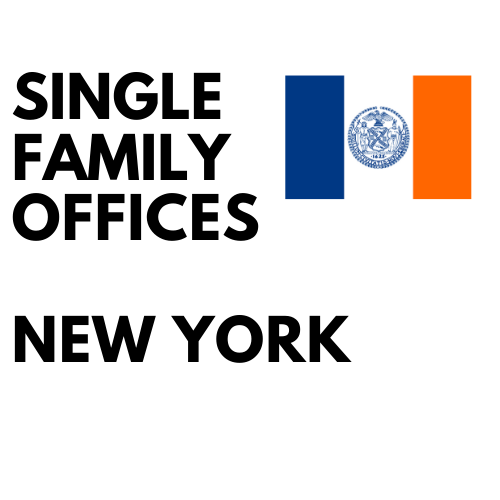 This list is part of our unique database of more than 300 U.S. Single Family Offices.

Download a preview of our US single family office database here.

Our list includes everything you need in order to get in touch with the most important single family offices. From contact details to in-depth information about the investment focus and exemplary investments. You can filter our list according to more than 23 data points. The list includes general e-mail addresses, phone number, postal addresses, websites, etc. We also list the executives, their respective roles and in many cases the links to their LinkedIn profiles.

Disclaimer: due to the secrecy of some family offices, we are sometimes not able to provide you with email addresses or other pieces of information. In case we don’t know the exact investment focus, the specific column is marked as n.a.

Home of America’s billionaires – and their family investment firms

No other American city hosts more billionaires than New York. Famous people like hedge fund billionaire George Soros, media mogul Michael Bloomberg or industrialist Robert Koch live in NY. The high density of investment firms and banks, talents in the financial industry as well as the high quality of living makes it an easy decision for many families to set up the family office in the city.

Interestingly, many billionaires who set up their single family office in New York earned their fortune also in the city’s financial industry. Often, hedge fund founders turn after several years their well-developing funds in family investment vehicles. The best example for this is famous mathematician and hedge fund founder Jim Simons.

New York is known for its skyrocketing real estate prices and stunning real estate projects. For example, Google acquired the famous Chelsea Market building in Manhattan for $2.4B. Another interesting project is the Hudson Yards development in Chelsea – which was also financed by many major single family offices. New York’s family investment firms are heavily involved in the real estate industry. For instance, a family office from 38th Street is the owner of many major NY hotels – and actively investing in new properties.

In order to get an impression of what kind of single family offices from New York we list, we introduce you to three interesting, exemplary SFOs: MSD Capital, Macanta Investments and Ceniarth.

The company serves as the private investment firm of Michael Dell and his family. Michael Dell, son of an orthodontist, started his studies in 1983 at the University of Texas to become a doctor. Instead of concentrating on his degree, however, he devoted himself to buying and selling IBM PCs, which led to dropping out of college just one year later. He then founded his company “Dell Technologies” with one of his fellow students at the age of 19 and started producing hardware. Today Dell is the third largest computer manufacturer in the world with revenues of approximately 90 billion U.S. dollars (2019) and Michael is listed in 18th place in the Forbes 400 ranking with a net worth of 16 billion U.S. dollars. MSD Capital was founded in 1998 and has its headquarters in New York, but also established offices in Santa Monica and West Palm Beach. The investment focus lies on leveraged buyouts, growth capital, real estate and private equity. One interesting exemplary investment of the recent past in terms of venture capital is “SparkCognition”, which they funded in a Series C funding session. SparkCognition is a global leader in cognitive computing analytics. A highly awarded company recognized for cutting-edge technology, SparkCognition develops AI-Powered cyber-physical software for the safety, security, and reliability of IT, OT, and the IoT. The company’s technology is capable of harnessing real-time sensor data and learning from it continuously, allowing for more accurate risk mitigation and prevention policies to intervene and avert disasters.

Macanta Investments is the primary investment vehicle for Terence M. O’Toole and his family. Terence O’Toole is one of the founding members of the Princial Investment Area (“PIA”) at Goldman Sachs and became a partner in 1992. Since then he has been a private investor, mainly in private companies. He retired from Goldman Sachs in 2004 and joined “Tinicum”, a 1 billion U.S. dollars private investment partnership, in 2005 as Managing a managing member. He then founded Macanta Investments in 2016, to consolidate his family’s direct investing activity. The company strives for long term investments in the private equity sector and makes both active control investments and also takes minority passive positions in businesses. Their focus is broadly diversified ranging from software and internet to industrial manufacturing. In 2017 Macanta Investments partnered with the Fremont Group, a California based Single Family Office, which is listed among our Californian Single Family Offices List, and formed the Fremont-Macanta LLC. Together the two family offices seek to be a long term owner of high quality business. One recent investment of Macanta is “VidMob”, a video content creation network and platform where brands can create digital video ads with expert teams.

Ceniarth is dedicated to the wealth of the Isenberg Family. Eugene “Gene” Isenberg, who passed away in 2014, was the chairman and CEO of Nabors Industries from 1987 to 2011. Nabors Industries is active in the field of oil exploration and oilfield services. Just after Gene joined the company, he immediately distinguished himself as one of America’s most gifted business strategists and dealmakers. Under his leadership, Nabors became a dominant player in gas and petroleum drilling markets in Alaska and the lower 48 U.S. states. The firm also excelled in Canada, Central and South America, the North Sea, the Middle East, Asia, Africa, and countries in the former Soviet Union. Gene also served as a director of the American Stock Exchange and the National Association of Securities Dealers. Ceniarth was founded by Eugene’s daughter, Diane Isenberg, in 2013 and is focused on funding market-based solutions that benefit underserved communities. Through their investing activity (mainly private equity and venture capital), they provide capital to accelerate the deployment of products and services that directly impact underserved communities. They aim to support enterprises in ways that lead to long term commercial sustainability. In 2015, they invested in “Zola Electric”. ZOLA Electric designs renewable energy solutions based on the latest in solar, battery and power electronics technology.

There are no reviews yet.